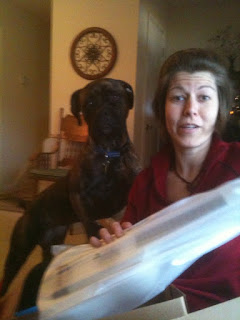 Megan, I see your Bartelby and raise you a Maggie.
Posted by Will Collier at Friday, December 25, 2009 No comments:


I doubt H.P. Lovecraft would exclaim, "Awesome!" on seeing this, but I sure did...


I'm hearing this morning that Parker Griffith (D-AL) will announce that he's switching parties as soon as this afternoon. That north Alabama seat has been Democratic since time immemorial.

Update: Politico concurs. Griffith, not coincidentally, is a medical doctor.
Posted by Will Collier at Tuesday, December 22, 2009 No comments:

Idiocy at the AP


Check out this eye-roller in an AP "news" article headlined "Dems against Dems in health care vote struggle":

Democrats are "looking for 60 votes," said Dick Durbin of Illinois, the party's second-ranking Senate leader — a statement that has characterized their effort to overcome Republican opposition for months.

Um, 'scuse me, David Espo, AP Special Correspondant, but how is it that the Democratic Party's failure to drum up 60 votes from their 58 senators and two Democrat-affiliated "independents" characterizes "Republican opposition?"
Posted by Will Collier at Monday, December 14, 2009 1 comment:


If this transcendent rant by Fake Steve Jobs, in which FSJ dresses down AT&T CEO Randall Stephenson, doesn't make next Friday's Week In Blogs, Martini Boy ought to just go ahead and pack it in. A brief sample:

So let’s talk traffic. We’ve got people who love this goddamn phone so much that they’re living on it. Yes, that’s crushing your network. Yes, 3% of your users are taking up 40% of your bandwidth. You see this as a bad thing. It’s not. It’s a good thing. It’s a blessing. It’s an indication that people love what we’re doing, which means you now have a reason to go out and double or triple or quadruple your damn network capacity. Jesus! I can’t believe I’m explaining this to you. You’re in the business of selling bandwidth. That pipe is what you sell. Right now what the market is telling you is that you can sell even more! Lots more! Good Lord. The world is changing, and you’re right in the sweet spot.

Seriously: read the whole thing. And then forward it to every bureaucratic corporate idiot you've ever had to deal with.
Posted by Will Collier at Sunday, December 13, 2009 No comments:


One of the wonkier debates over the past couple of decades involved the use (or rather non-use) of what was called "dynamic scoring" for Congressional and/or Administration economic projections. In simplified terms, the proponents of dynamic scoring held that when estimating the impact of tax cuts, government estimators should take into account expected additional economic growth--and thus additional revenues--encouraged by the lower rates, as opposed to assuming growth (or lack therof) would basically stay the same and simply subtracting the difference in the dollar amount of anticipated taxes that would have been collected under higher tax rates.

When reading this bit from Mickey Kaus's weekend Twitter compilation, I was reminded of those old arguments:

Mystery Pollster cites a CNN poll discovering that 10% opposed the [Obama health care] plan as "not liberal enough." And that's not 10% of opponents. It's 10% of all those asked. Add that 10 to the 39 percent who support reform in the Pollster.com poll of polls and you have ... well, 49%. Almost a majority! ...

I think Mickey is kidding himself here. While going harder towards full Canadian/UK-style socialized medicine probably would garner a lot closer to 100% support among liberals, actual liberals only make up about 20% of the electorate. A dynamic score of that poll would have to take into account how much support such a turn to the Left would cost from moderates (to say nothing of the additional conservative opposition it would gin up). You're going to fall way, way short of 49% in that eventuality.

The Left--both hard and soft varieties (I think I'm safe in placing Mickey in the latter camp)--has been kidding itself for fifteen years now about why Hillarycare failed, and they're still kidding themselves over why Obamacare is failing today. Here's a hint: it ain't because either plan "isn't liberal enough"...
Posted by Will Collier at Monday, December 07, 2009 2 comments:


This post of Jonah's at The Corner, regarding the relative value of computer models (in this context, as applied to Climategate), reminded me of an experience I had as a young engineer.

One of my first jobs was doing flight test analysis on the AMRAAM missile. My group would take data from actual missile firings and determine what had gone wrong (or right) in the test. Another group in the same building was responsible for maintaining the AMRAAM computer model that was used for simulations and pre-mission testing.

For one set of flight tests, I ran across an anomaly in the way the missile was behaving in a particular flight environment. We saw the same behavior repeated in several tests, and after checking the old wind tunnel reports from when the missile was first designed, we figured out what was causing the problem and wrote a report about it. A year or so later, as a result of that work, the missile software was modified to prevent the problem from occurring.

But a week or so after we submitted the report, the manager of the simulation group stormed into my cube and slammed a copy of it down on my desk. "This analysis is all wrong!" he exclaimed.

"What's wrong about it?" I asked. He pointed at a graph taken from the missile's internal sensors showing the anomalous behavoir. "That! That's all wrong!"

Nonplussed, I just stared at him. "That's from a sensor in the missile, from flight test. It happened several times. What's wrong with it?"

So there you have it: to a modeling nerd, when the simulation disagrees with reality, reality is at fault...
Posted by Will Collier at Wednesday, December 02, 2009 1 comment: