The wife and I went to Herman Cain’s kickoff rally in Atlanta's Centennial Olympic Park on Saturday. Among my wife's many sensible traits is a predilection to be apolitical, but she’s a became a fan of Cain's thanks to his local radio show, and I've liked Cain since he pulverized a gobsmacked Bill Clinton in that now-famous 1994 "town hall meeting."

Cain was impressive onstage Saturday, and the sizable crowd (announced at 15,000, but my admittedly-amateur guess would place the number at about half that) was an interesting mix. Lots of Tea Party and Fair Tax types, as you’d imagine, but noticeably more black folks than you normally see at Republican events around here. If you made me put a label on the common denominator, I would choose 'emphatically middle class.'

Most of the local media were there in force, including staffers from the station that carried Cain’s radio show, who arrived complete with “Here I Am—Rock You Like A Herman Cain” t-shirts (surely the best independently-offered candidate slogan since “Fred Thompson: Because The Russians Don’t Take A Dump Without A Plan”). 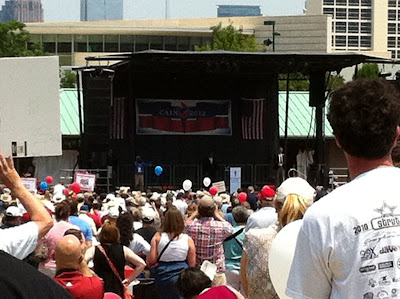 Cain's candidacy has plenty of drawbacks: no money, no experience in government (although many, including Cain himself, view that as a feature), no foreign policy background, considered “fringe” by even heart-in-the-right-place establishment types like Hugh Hewitt, but I have to say, the moment of the announcement itself was surprisingly moving.

Even though I like the guy, and voted for him in the 2002 senate primary, I was still surprised to find myself getting choked up at that point. Where else in the world would the son of a chauffeur and a maid rise to the top of the business world and then push himself, basically by sheer force of personality, into position to have even a marginal shot at the Presidency? Add to that Cain being a black man from the South running as a Republican, and the sheer unlikely-ness of it is at once breathtaking and quite heartening.

It's hard to imagine Cain returning to Centennial Park eighteen-odd months from now to greet a much-larger crowd from a more-elaborate stage, but stranger things have certainly happened. I don’t know how well Cain do from here on out, or even whether his candidacy is a good idea, but a half-hour after noon last Saturday was still a very fine moment.
Posted by Will Collier at Monday, May 23, 2011 No comments:


Via the Blogfaddah, this long account in Time of Dominique Strauss-Kahn's long history of bad behavior:

Strauss-Kahn may have been abetted by the fact that most of his so-called conquests involved ideological fellow travelers — as was reflected by the Banon case. Says the French lawyer who asked not to be named: "My clients and other women I've been contacted by with reports of sexual aggression by Strauss-Kahn were all either Socialist Party members, supporters, or involved in wider leftist political activity that eventually brought them into contact with Strauss-Kahn. He has said he loves women, but it seems more accurate to say he loves Socialist women. I suppose he viewed that milieu as providing his supply of new women, and as one where women who caught his eye would either be compliant, or keep quiet about having to fight off his advances. Either way, there are a lot more women — and men — in Socialists circles who know about his activity than have ever said so."

The next sentence of the Time piece has a French "diversity" expert saying,


"If I try transposing the situation in New York on Sunday to France, I just can't do it," says Diallo. "Not only because the woman is black and apparently an immigrant. But also because she's a housekeeper. Perhaps even more than her race, her station in society would probably prevent authorities [in France] from taking her accusations against a rich and powerful man seriously. Racism is on the rise here again, but class discrimination has never gone away."

Well. I won't presume to opine on the state of French social mores, but here's a thought experiment for you: In the first paragraph quoted above, replace the words "Strauss-Kahn" with "Ted Kennedy," and the word "Socialist" with "Democrat."

Now it isn't so hard to imagine such things happening in New York... or Chappaquidick... or Washington, D.C., is it?

UPDATE: Jonah Goldberg kindly quotes the above in his syndicated column today.
Posted by Will Collier at Thursday, May 19, 2011 No comments:

The Irish government plans to institute a tax on private pensions to drive jobs growth, according to its jobs program strategy, delivered today.

Without the ability sell debt due to soaring interest rates, and with severe spending rules in place due to its EU-IMF bailout, Ireland has few ways of spending to stimulate the economy. Today's jobs program includes specific tax increases, including the tax on pensions, aimed at keeping government jobs spending from adding to the national debt.

The tax on private pensions will be 0.6%, and last for four years, according to the report.

Lovely. Raiding citizens' savings to pay for a "jobs program." That's not just robbing Peter to pay Paul, that's ripping off Peter's grandma to give Paul a bar of genuine iron pyrite.

Worse news, at least from an American's viewpoint: Barack Obama is visiting Ireland this month.

Further investment advice: boost your holdings in tar and feathers manufacturers while you're at it...
Posted by Will Collier at Wednesday, May 11, 2011 2 comments:

Public safety advocates are condemning Atlanta Police Chief George Turner's ouster of an officer they credit with restoring confidence in the police in their neighborhoods.

Those same leaders are now questioning if Turner is more concerned about keeping subordinates in line than he is about having quality commanders. They also question Turner's commitment to community policing, a strategy in which cops work closely with the community. They credit it for last year's 16-percent drop in crime in Zone 5, which stretches from downtown to Atlantic Station.

Leaders from Midtown, Home Park, the Old Fourth Ward and other neighborhoods plan to converge on the Atlanta City Council's public-safety committee Tuesday afternoon to protest Turner's decision to remove Williams as major in command of Zone 5 and demote him to lieutenant. Williams said he is retiring Wednesday rather than accept the re-assignment.

Commissioner Burrell, Major Colvin, please call dispatch...
Posted by Will Collier at Tuesday, May 10, 2011 No comments:


Nice piece here about the centennial of blues godfather Robert Johnson, who would have turned 100 last Sunday. According to legend, Johnson got his licks thanks to a deal with the devil, but in reality, his teacher was a man from tiny Grady, Alabama, which is also my dad's hometown:

LaVere credits Johnson's talent not to a soul-selling crossroads deal, but to a self-imposed apprenticeship under another little-known musician, Ike Zimmerman.

"Ike showed him how to play and Ike was a studied musician. They used to spend all night knees to knees, and Ike would teach him how to sing and present himself," LaVere said. "He left the blues early on and became a sanctified preacher and died in Los Angeles in 1965."

Johnny Shines, a contemporary and friend of Johnson's is quoted in the article. Shines, who passed away in 1992, had a much longer life than Johnson, and performed well into his seventies. He often played on Sundays at the War Eagle Supper Club when I was in college. If you never got to see him, you really missed something; he was one of the last living links to the origins of the blues.
Posted by Will Collier at Tuesday, May 10, 2011 No comments: