Barry Was Told There Would Be No Math

I did the math on this. If you collect the corporate jet tax every year for the next 5,000 years, you will cover one year of the debt that Obama has run up. One year.

To put it another way, if you started collecting that tax at the time of John the Baptist and you collected it every year — first in shekels and now in dollars — you wouldn’t be halfway to covering one year of the amount of debt that Obama has run up.

As for the other one, he mentions again and again, the oil depreciation tax break — if you collect that one for 700 years, you won’t cover a year of Obama deficits.

And then here’s my favorite. I worked it out in the car on the way here. If you collect the corporate jets and the oil tax together — get all the bad guys and the fat cats at once — and you collect it for 100 years, it covers the amount of debt Obama added… in February!

And he pretends that he’s the serious adult at the table.


Whenever I read something like this Dan Mitchell post on a prospective second bailout of bankrupt Greece, I'm reminded of my honeymoon.

No, not because of that. Get your mind out of the gutter.

The wife and I spent a couple of weeks bumming around the Aegean after the wedding. Our favorite stop was the village of Oia on Santorini, where we spent a few too-short days in a beautiful, tiny boutique hotel built literally into the side of the island's volcanic caldera.

The hotel's manager was an American who had made his money in software and retired young to Greece. He was sufficiently acclimated to his new home to talk about "your elections," meaning the 2004 U.S. presidential contest, and to go on at length about hormones and such in American food (a European obsession, it seems).

This was in mid-March, a couple of weeks before the tourist-season-proper would begin that year, and as our host noted, the island was gearing up for the oncoming throng of visitors. Plumbers and carpenters were busily making repairs, and untold gallons (sorry--liters) of white and blue paint being applied to every exposed surface.

"There's not much time until the cruise ships start showing up," the hotel manager said as we looked out over the indescribably-gorgeous bay in the center of what had been a circular island before an ancient volcanic eruption. "So the Greeks are all very busy fixing their places up." He paused for a moment, and then corrected himself.

"Actually, the Albanians are all very busy." He gestured down the cliff towards a couple of apparently-foreign laborers putting in a new window. "Greeks," he finally sighed, "don't work."
Posted by Will Collier at Monday, June 27, 2011 2 comments:

My Professional Opinion As An Aerospace Engineer

Austrian research company IAT21 has presented a new type of aircraft at the Paris Air Show which has the potential to become aviation's first disruptive technology since the jet engine. Neither fixed wing nor rotor craft, the D-Dalus uses four, mechanically-linked, contra-rotating, cylindrical turbines for its propulsion, and by altering the angle of the blades, it can launch vertically, hover perfectly still, move in any direction, and thrust upwards and hence "glue down" upon landing, which it can easily do on the deck of a ship, or even a moving vehicle. It's also almost silent, has the dynamic stability to enter buildings, handles rough weather with ease, flies very long distances very quickly and can lift very heavy loads. It's also so simple that it requires little maintenance and requires no more maintenance expertise than an auto mechanic. It accordingly holds immense promise as a platform for personal flight, for military usage, search and rescue, and much more.

Somewhat more seriously, I'd like to see more detailed info about this sucker, but if the performance is anything close to the full description, it's one hell of a design.


Say hello to Maggie, 75lbs of runt Bullmastiff, rescued a couple of years ago and now spoiled entirely rotten: 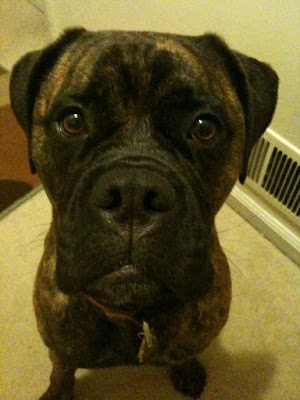 I Don't Think So, Mickey


From his latest perch at the Daily Caller, Mickey Kaus opines in regards to the "greater meaning" of Weinergate,


From al-Reuters, this bit of fail: 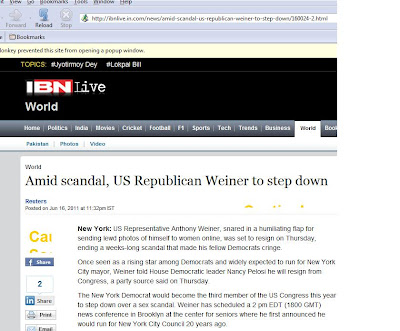 I guess one man's Democrat is another man's Republican. Or something...
Posted by Will Collier at Thursday, June 16, 2011 No comments:


In the "even better because he saved me the trouble of writing it" category, Steve Green takes The Atlantic's lame slam of Ferris Bueller's Day Off out behind Chez Quis and grinds it into a sausage so delectable, Abe Froman himself would be proud to serve it with a side of pancreas.

So go read it now, before I have to get snooty.
Posted by Will Collier at Thursday, June 16, 2011 No comments: