The main Atlanta event at the state capitol is still going on as I type this; when we left at around 8:30, the crowd was announced from the stage as 15,000 strong--50% higher than the most optimistic estimate beforehand--and still growing. We passed at least a couple of hundred new arrivals on our way back to the MARTA station.

If nothing else, the Atlanta rally, which was probably the largest and best-organized (in relative terms) in the country, easily gave lie to the notion that the Tea Party movement is anything close to an orchestrated affair. From the location (with most of the crowd squeezed into city streets vainly looking uphill towards the effectively-invisible main stage), to the panel trucks parked between most of the crowd and the stage, to the underpowered PA to the entirely haphazard list of speakers (very few of whom were what you'd call accomplished orators), this was not a polished affair.

I'm not saying that to be mean or overly-critical of the organizers, but it was very easy to tell that they'd never quite done this kind of thing before, and clearly, were not ready for the kind of numbers that actually turned out. I wasn't able to get a lot of elevation for pictures, so just a couple here to give you an idea of the ground-level view: 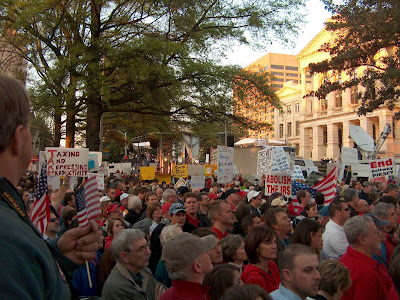 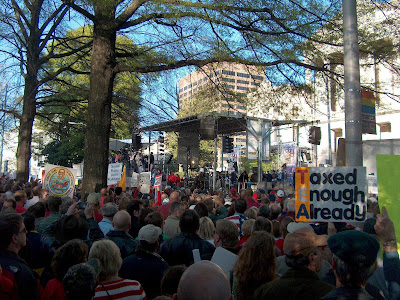 As you may be able to make out, this was a solidly bourgeois crowd; I'm quite sure that well north of 95% of them had never set foot at a protest rally before. As my wife noted early on, it was also easily the most polite big crowd either of us had ever seen. It seemed like almost everybody except us had brought a flag or a sign of some sort, and a lot of the signs were pretty good: 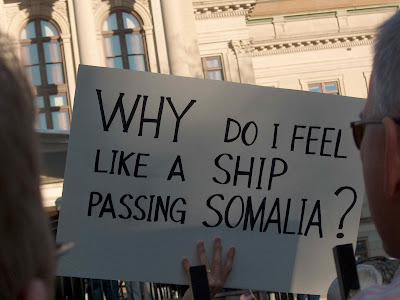 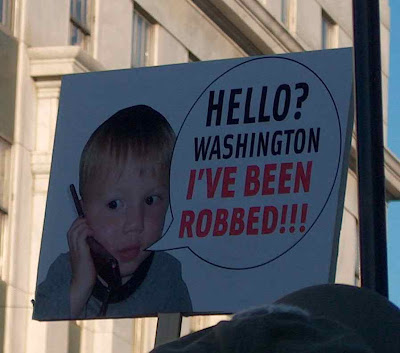 This one was my favorite. I wouldn't have guessed a month ago that Janet Napolitano would turn out to be the most disliked member of the Obama cabinet, but she certainly went a long way towards claiming that dubious title this week: 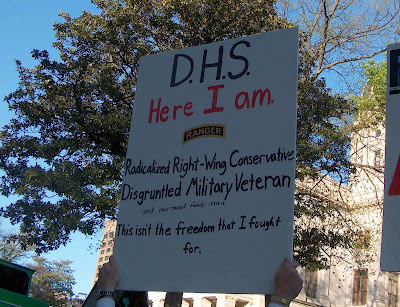 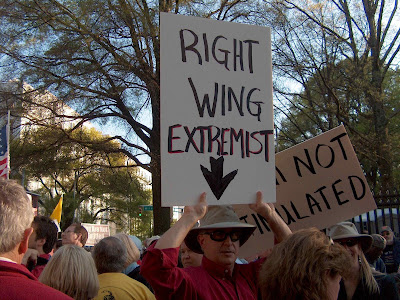 This being the home base of Neal Boortz, the Fair Tax troops were out in force: 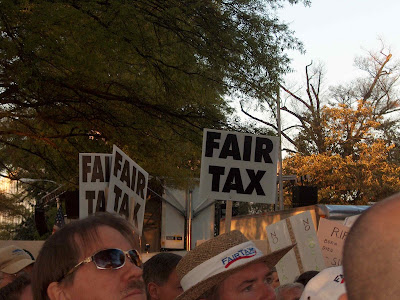 Maybe surprisingly for a political rally, there were very few mentions of actual politicians, beyond a fair number of anti-Obama posters (report these people to DHS immediately!), but even for all that, it was pretty clear which national figure was this crowd's favorite: 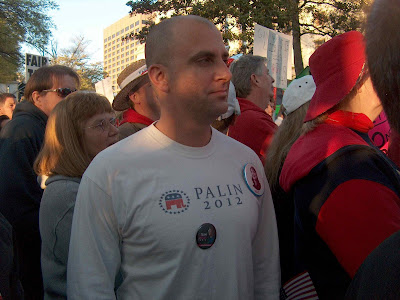 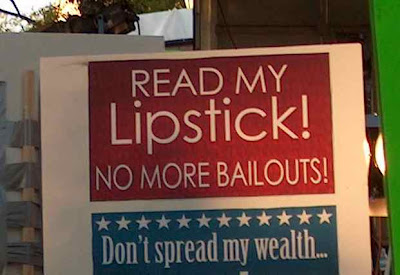 It was also clear that there was precious little hometown pride in the television network physically closest to the event: 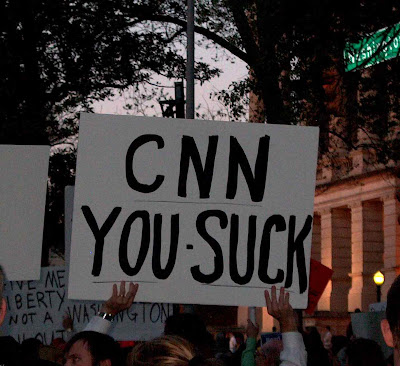 We stuck around long enough to hear local radio star Eric Von Haessler of the Regular Guys (full disclosure, Regular Guy producer Tim Andrews, whose politics are decidedly different from Von Haessler's, is an old friend) and then headed home. Like most everybody else, we've got real jobs to go to in the morning, and only so much time to spend on politics.

Putting aside the logisitcal confusion that reigned around much of the event (Von Haessler himself got stuck in the middle of the crowd, and posted a hilarious call for help via his iPhone), the fact that this many entirely normal people would turn out for a somewhat nebulously-defined political rally in the middle of a work week is more than a little remarkable. I can't tell where this thing is going, and I don't think there's anybody else who has much of a bead on it, either... but like they used to say way back where, something's happening here. This is bigger than the usual annual griping on Tax Day. It's got deeper roots than the standard partisan sniping from the out of power side.

Having seen it for myself, I'm thoroughly convinced that it's the beginning of... something. What exactly that something is, we'll find out over the next couple of years, but the thing we're now calling the Tea Party movement has picked up an almighty big head of steam in a very short period of time. Much as the Left and the Obamabots in the press would like to laugh it away, it's on the move, and it's not going to be stopping anytime soon.
Posted by Will Collier at Wednesday, April 15, 2009